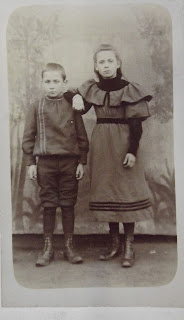 As most of you followers of our blog know, Gayle and I are writing a book on the assassination of Marx Dormoy and a book on the Paris synagogue bombings of 1941.  Right now I'm working on a background chapter explaining who Marx Dormoy was.  As in any biography a certain amount of childhood information is passed on.  So today I'm thinking about the boy, Marx.  He grew up in an intensely socialist family.  His father was a friend of Karl Marx and after his father died, the young boy Marx Dormoy often spent time with Karl Marx's grown daughter and her husband.  I can't imagine Marx Dormoy's boyhood was too wonderful.  His father died while Marx was still a boy and the family suffered the loss of two daughters, sisters Marx never knew, but that loss must have affected the family dynamic.  Perhaps that's why, Marx's one surviving, elder sister, Jeanne, was so protective of her little brother.  Neither married, although Marx was known to have had many lovers, but it was Jeanne who seemed to attend to his daily needs.  They lived together much of their lives and she cooked for him and otherwise took care of him.  She even came to stay in the same hotel with him while he was under house arrest in 1941.  Yes, Jeanne Dormoy was there the terrible night her brother was blown to bits.  Hotel personnel had to restrain her from entering the room and seeing the grisly sight---when a bomb placed under his bed, ripped most of his head from his body, spewed brain matter across the walls, and reoriented his face under his arm.  Jeanne spent the rest of her life (and she lived into the 1970s) trying to bring her brother's assassins to justice. She never did, but I believe she would be most interested in our book: Vengeance: Vichy and the Assassination of Marx Dormoy.

Examine the picture.  Look how Jeanne rests her arm on Marx's shoulder, leaning on him with with her hand stretched out as if to keep other's away.  She wasn't able to protect him, however, as he grew into a notable politician, defender of socialism and opponent of racism.  Fierce sibling loyalty marked their lives.  Jeanne was a most devoted "big sister."
Posted by Moderator at 7:12 AM No comments: 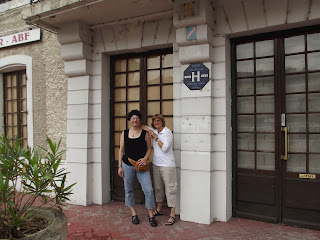 Well, here we are, in 2011, in front of the hotel where former French Interior Minister Marx Dormoy, the subject of our next book, was assassinated in 1941.  The hotel once had a gourmet restaurant, but when we were there, it was out of business, alas, so we were not able to eat there.  We did sneak into the courtyard and take photos of the whole building, which is a good thing, since the owners were bankrupt, according to the local hearsay, and there was no indication that the stately building or its gourmet restaurant would ever be reopened.  Oh well.  At least we're telling the story of the most famous murder committed there.  Who knows?  Maybe if enough people like the book, someone will step in and reopen the Relais de l'Empereur in Montelimar before the 17th-century hotel is torn down.  Let's hope so!